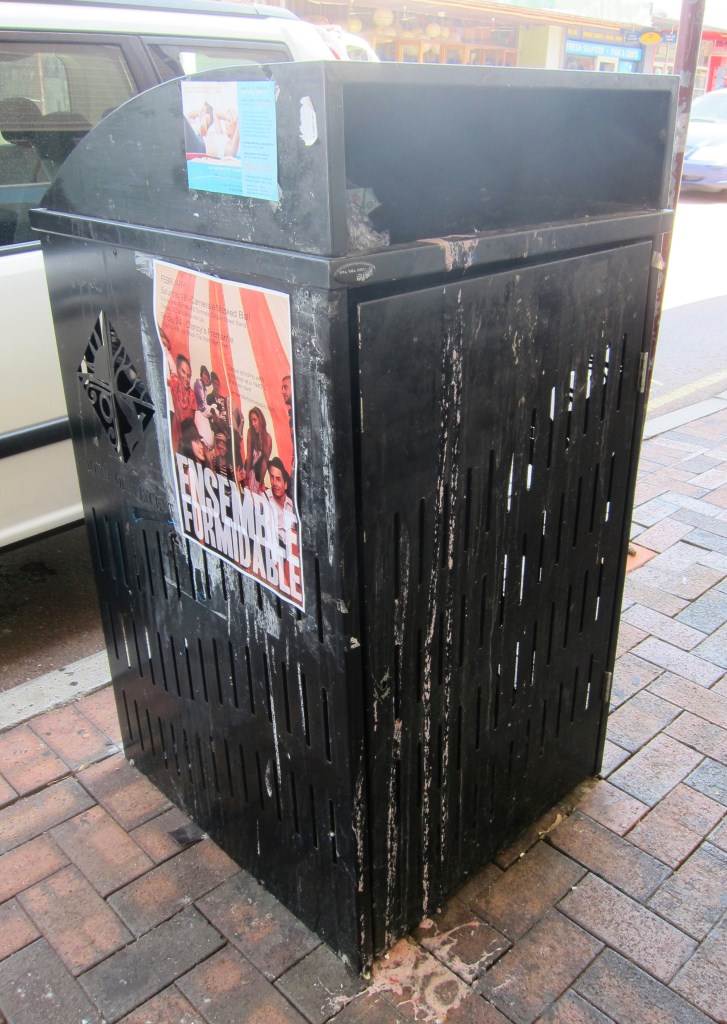 It’s a beautiful place …  the sky is blue, the shops are full …  people are out and about and talking to each other in the street …

Let’s remind ourselves that the public place is very expensive to build.  It’s full of lanes, shops, streets, art, tables, seating, signage, telecommunications and more … They are our retail mainstreet environments.

So, it’s worthwhile to maintain our expensive investment, I say …  Therefore, when its when its a stunning Saturday morning and all the world fills your streets, please do not confront them with vomit-shaped milkshake spills.

Because its difficult to keep your pecker up and continue your investment of time, energy and cash within the local economy if the surroundings say, ‘We don’t care’.

Even if you do.

‘Never mind, you say.  I bet it will be cleaned immediately’. 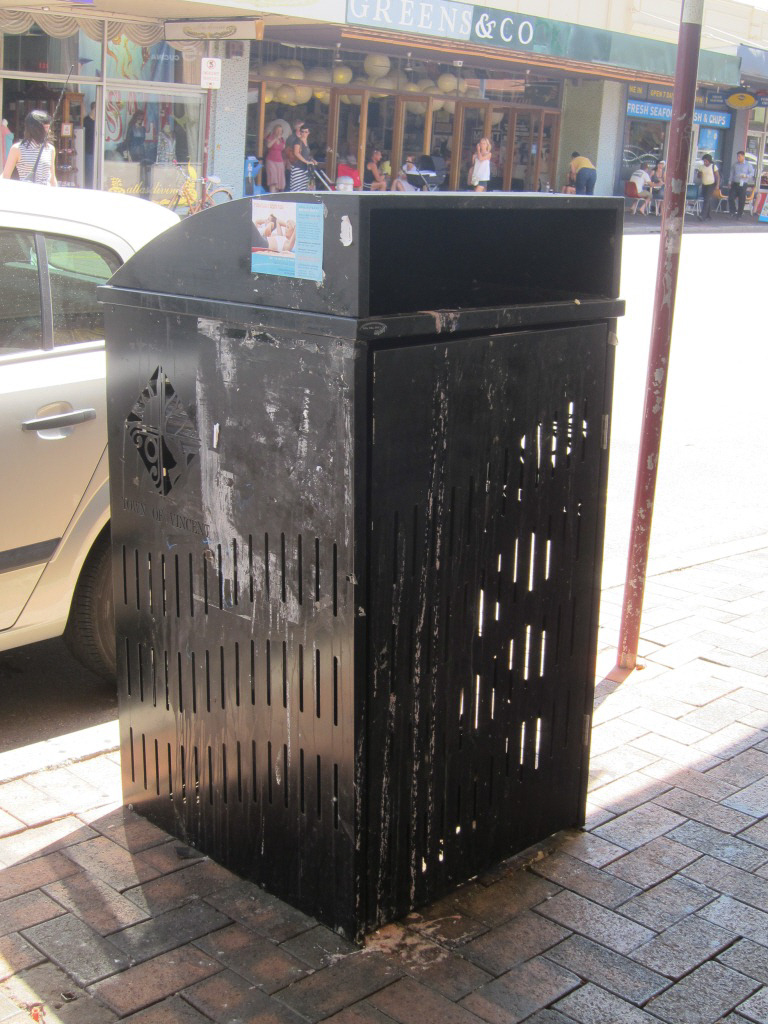 And now we start the new working week.

It’s important to keep in mind that this isn’t a remote bin.  It’s central, in a prime, retail mainstreet area of about 60 shops with only one vacancy.

Over three weeks later, somebody has tried, but is it good enough? (No.) 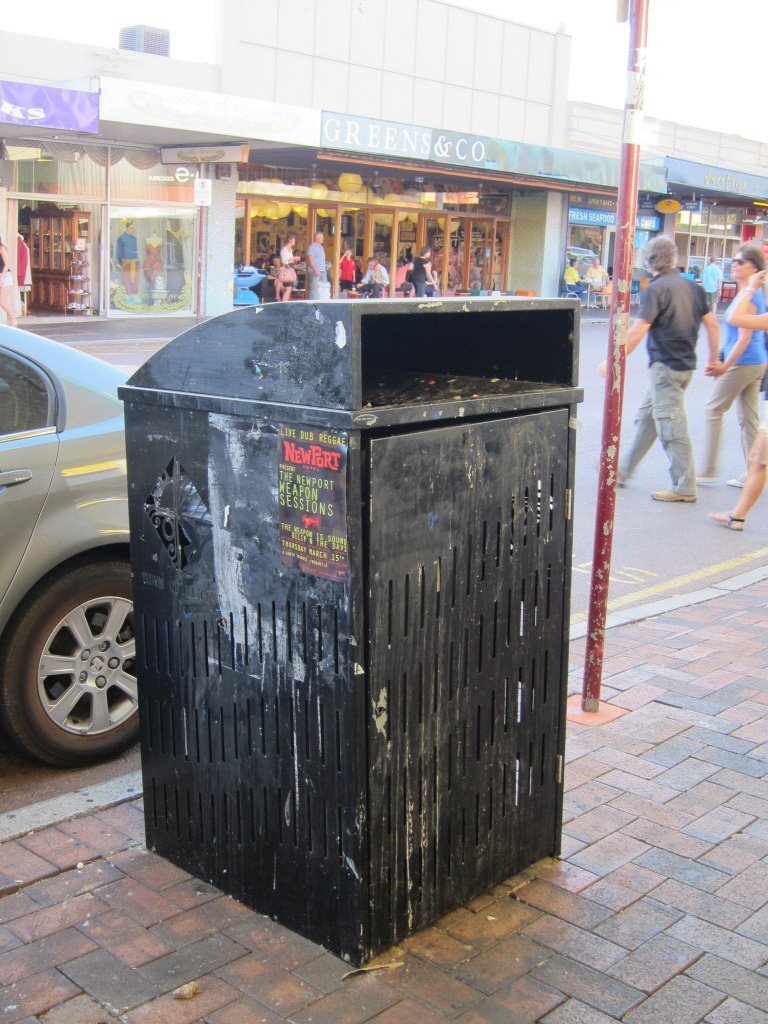 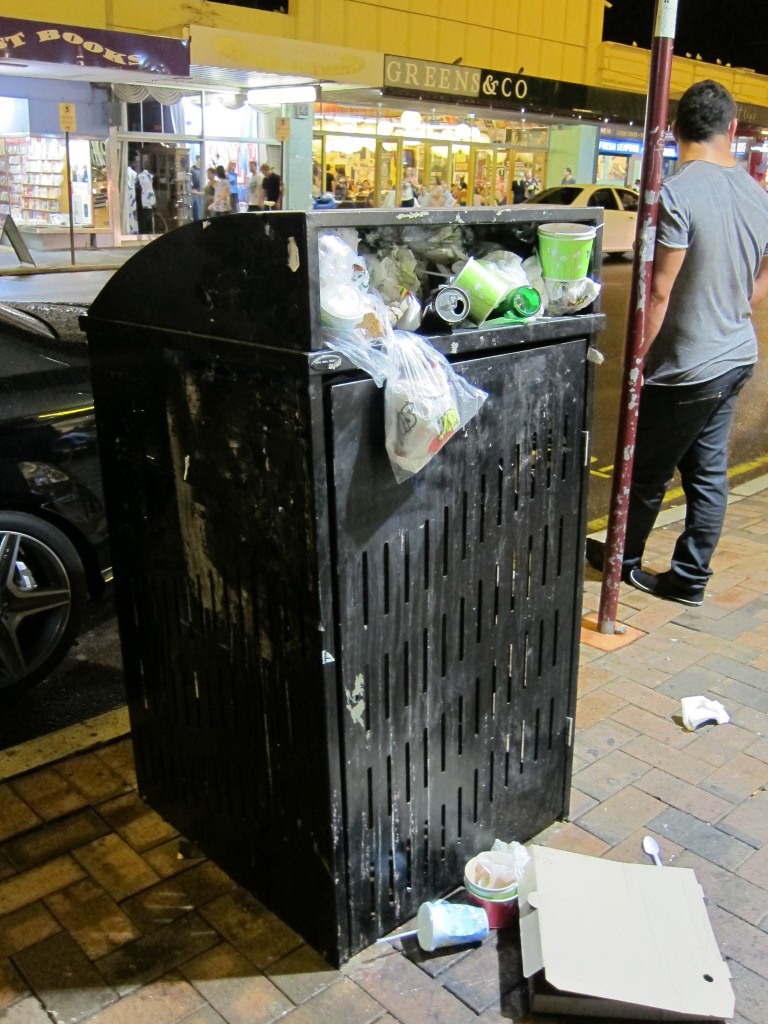 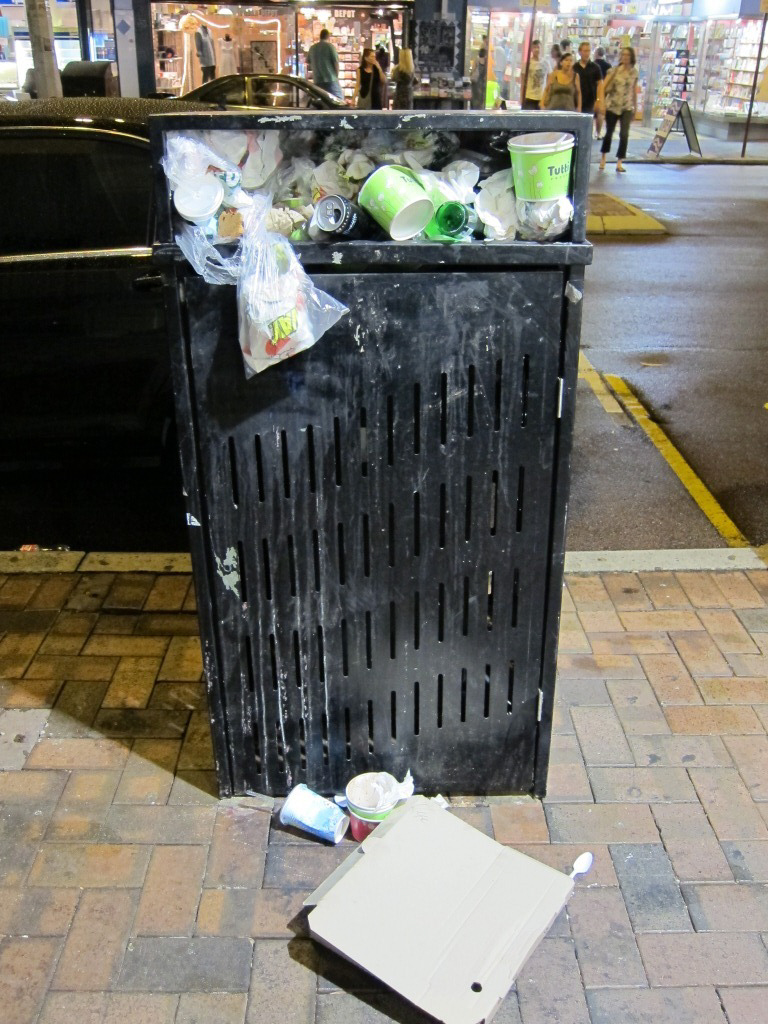 We know the local authority cleans the bins, but is it sustainable to depend on only them to do it?

‘Well,’ you say, ‘they should just spend whatever it takes to get the job done properly.’

But to support the investment the local authority makes in cleaning, we must also exercise influence over activities which generate litter.

If the shops and all the public infrastructure were private property, and if it was managed appropriately (refer to HDWE in the linked article and video for examples) the principal consideration would be selecting businesses that contribute to the public realm and economy.  Toby Shannon in the article’s video says that the Howard de Walton Estate’s principal consideration with leasing contracts is ‘what the retailer can bring to the area’.

Some cities dangerously presume that retail curation is out of their grasp.  It is not.

This takes time and preparation.

Turn your back on the new, raised veggie beds in your garden and I’m sure some things can thrive without you.  But you can have a greater diversity of produce and a more sustainable growing culture if you meticulously edit the weeds, curate the plants you need and rotate them all to sustain the ground.

For a city to only increase its cleaning budget is unsustainable because it’s like replacing soil at each new season instead of suitably tilling your patch properly throughout the year.

So, cities must participate in the curation of retailers for the betterment of the community, and not trust ‘the market’ will produce the best outcome for the local economy.

That way, retailers who can curate the public realm can be encouraged and these who do not, or even despoil it, can be discouraged.

As Martin Butler said, ‘You are in the business of being chosen’.

When we are within a place, we seek something from it in return other than the goods in our shopping bag.  Mainstreets are chosen not only by the goods and services they provide us, but by the level of engagement and personal development we experience whilst there.

We go to places which return to us greater personal development for our time, energy and cash, and we will go where there appears to be a better return on our investment.

Mainstreets may not be aware of it, but they are competing with each other to provide this to people.

The economy of the locality in the photos is threatened because people will go to more comfortable surroundings where their time, energy and cash appears to be more respectfully handled.

If you turn your back on your garden, some things will survive despite the neglect.  But eventually you will have to replace all the soil and start again when you really, seriously, want a great garden.

And also a great shame. 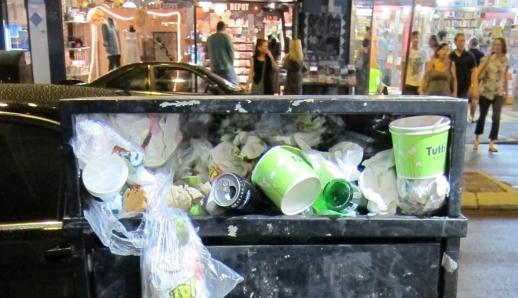